US down Turkey 2-1 in World Cup tune-up 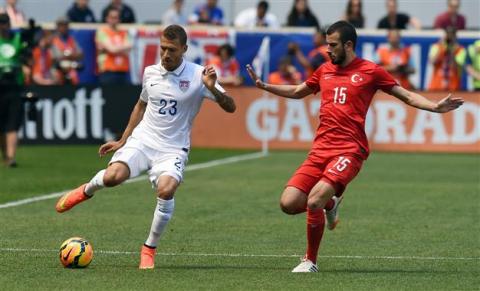 Fabian Johnson (L) of the US controls the ball against Turkey's OÄuzhan Ãzyakup during the friendly match between Turkey and the United States June 1, 2014 at Red Bull Arena in Harrison, New Jersey. AFP Photo

German-born Fabien Johnson, one of US manager Jurgen Klinsmann's army of young, dual-citizenship footballers, made his first strike for the Stars and Stripes an impressive one, combining with US veteran Michael Bradley for a superb 26th-minute goal that gave the United States a 1-0 lead.

American veteran Clint Dempsey exploited a lapse in the Turkish defense to double the score in the 52nd minute.

Klinsmann took advantage of the match to give Brad Guzan, backup to starting keeper Tim Howard, some time on the pitch.

Guzan was in front of goal for the second period, and when Turkey pulled one goal back in the 90th minute with a penalty by SelÃ§uk Ä°nan.

"Overall what we expected - a Turkish side that can create problems for you any time," Klinsmann said. "Already in the first half, they exploited us here and there. But overall I think it was a good game. It was quite an open game."

The match was the United States' second friendly since Klinsmann announced his 23-man squad for the World Cup finals in Brazil -- shocking many by the omission of all-time leading US scorer Landon Donovan.

They defeated Azerbaijan 2-0 last Tuesday and will take on Nigeria in Jacksonville, Florida, next Saturday before departing for Brazil.

The United States are drawn in Group G along with Ghana, who reached the quarter-finals in the 2010 edition, Euro 2012 semi-finalists Portugal and one of the favorites for the trophy -- Klinsmann's native Germany.

Turkey didn't qualify for the World Cup, but Klinsmann said...