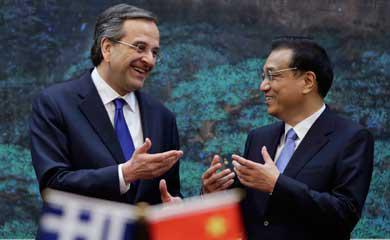 Chinas Premier Li Keqiang and President Xi Jinping are to visit Greece in the coming weeks in what Greek government officials are hoping will mark the beginning of a boost in bilateral trade ties with a series of investments expected to be signed.

Li is due in Athens on June 19 and 20 for talks with his Greek counterpart Antonis Samaras that are expected to reaffirm the strong interest already expressed by the Chinese authorities in investing in Greece. In particular, Li and his delegation are expected to emphasize interest in the Piraeus and Thessaloniki port authorities as well as Athens International Airport, Trainose, which is the operating arm of the Hellenic Railways Organization (OSE), and other state-controlled assets that are slated for privatization.

The scheduled visit by Chinese President Xi to Greece will be less business-oriented  he is due to meet his Greek counterpart on the Aegean island of Rhodes in mid-July  but it is expected to underline Chinas commitment to investing in Greece. According to sources, in a letter sent by Xi to Papoulias, ahead of the latters birthday today, the Chinese statesman described Greece as a strategic partner and reaffirmed Beijings interest in large-scale investments.