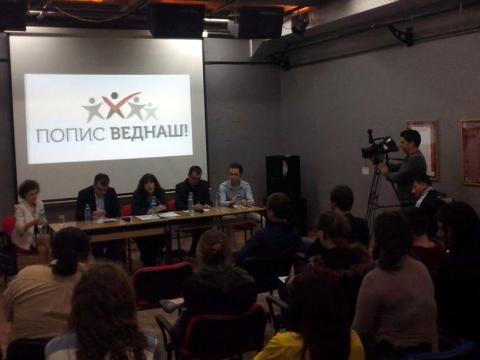 The coalition has launched a campaign called ‘Census Now’, saying that Macedonia must not be held hostage by political elites that interrupted the last census because of the sensitive issue of how many ethnic Macedonians and Albanians live in the country.

The campaigners will hold round-table discussions across Macedonia to promote the idea that a census is necessary to create proper development policies.

“You cannot carry out a successful regional development policy without a population headcount. The same goes for policies in education, economic development, infrastructure, transport,” said Biljana Bejkova from the NGO Info Centre.

The last attempt to hold a census in October 2011 was scrapped after it began due to ethnic disputes.

Ethnic Albanian parties and NGOs claimed that the Macedonian majority on the census commission had arranged the criteria in order to falsely underestimate the number of Albanians in the country.

The government of Prime Minister Nikola Gruevski then annulled the census after the commission tendered its collective resignation. The government has not budgeted for a headcount this year.

The last completed census in 2002 showed that 64 per cent of the country’s population was Macedonian and 25 per cent ethnic Albanian. Roma, Turks, Serbs and other minorities made up the rest.

Aferdita Imeri, an expert on social inclusion, said that socially marginalised groups were among the hardest hit by the lack of accurate population data.

“While the more powerful groups fight for their rights through lobbying, no one thinks about the most vulnerable, those who are on the margins of the society, because we don’t have them in our statistics and they are not included in our...