Reshuffle expected to be concluded on Wednesday 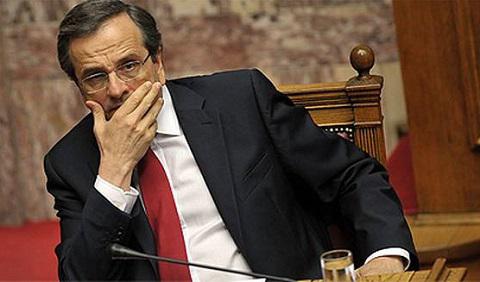 A reshuffle of the Greek government is expected to be concluded on Wednesday amid continued speculation over who will replace Finance Minister Yannis Stournaras in one of the crisis-hit country's most crucial posts, according to sources cited by Skai on Tuesday.

Skai suggested that Prime Minister Antonis Samaras is waiting for Deputy Prime Minister and Foreign Minister Evangelos Venizelos, chief of coalition partner PASOK, to return from a conference in Vienna before announcing the new Cabinet on Wednesday. Should this be the case, the new ministers may be sworn in as soon as Thursday, before President Karolos Papoulias departs for Norway to attend an official ceremony.

Skai also suggested that Public Order Minister Nikos Dendias has emerged as a likely successor to Stournaras, who may be in line to replace Giorgos Provopoulos as chairman of the Bank of Greece or to head a special committee taking on negotiations with the country's foreign creditors regarding a debt reduction.

Conservative MP Makis Voridis has also emerged as a candidate, according to the Skai report, either for the Finance Ministry portfolio or for that of the Development Ministry, as the current holder, Costis Hadzidakis, is said to be headed to Brussels to serve as an EU commissioner.

The report also suggested that it is considered unlikely that Samaras, an economist, will step in to replace Stournaras or that he will appoint his close associate, Stavros Papastavrou, to the position.