Serbian PM on visit to Vienna on Wednesday 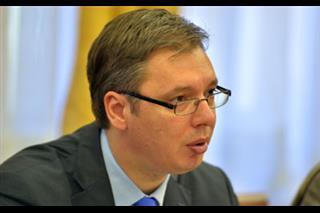 VIENNA - Serbian Prime Minister Aleksandar Vucic will travel to Vienna on Wednesday for the first time since taking office and confer with Austria's top officials.

The visit to Austria was due to take place on May 18-19, but the prime minister cancelled it because of catastrophic floods that hit Serbia.

As announced in Vienna, Vucic will first meet with Michael Spindelegger, Austria's vice-chancellor and finance minister.

He will then talk with Austrian Foreign Minister Sebastian Kurz who will host a working lunch in his honor.

Vucic is then due to meet Austrian businessmen.

Prime Minister Vucic, Finance Minister Lazar Krstic, also a member of the delegation, will take part in a business forum titled "Business Bridge", organized by the Economic Senate of Austria and Serbia.

In the meeting, Vucic will inform Austrian businessmen about the current situation in Serbia and steps that will be taken to improve its business climate.

At the close of his visit, Prime Minister Vucic will be received by Austrian President Heinz Fischer.