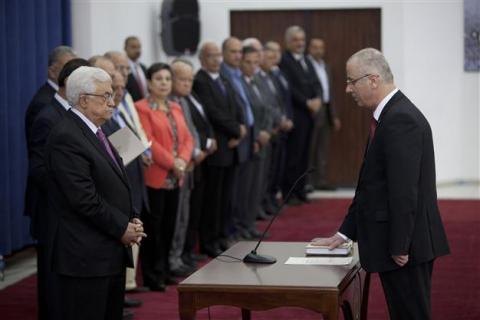 Palestinian Prime Minister Rami Hamdallah, right, puts his hand on the Quran in front of Palestinian President Mahmoud Abbas during a swearing-in ceremony of the unity government in the West Bank city of Ramallah on Monday, June 2, 2014. AP Photo

Ankara has voiced support for the new unified government between Palestinian President Mahmoud Abbasâ Palestine Liberation Organization (PLO) and Hamas and has urged the international community to also support the move.

âThe unity of the Palestinian people is indispensable for the building of a just and viable peace in the region. With this new government eliminating the rift between Palestinians, the first step toward this direction has been taken. We believe the arrangements within the PLOâs structure and elections expected to take place in the upcoming period will strengthen democratic legitimacy in Palestine,â the Foreign Ministry said in a written statement released late June 2 when it welcomed the new government and congratulated all Palestinian people.

âWe call on the international community to support this development, which aims at uniting the national democratic will of the Palestinian people,â the ministry said.

Abbas was sworn into the government on June 2 in a reconciliation deal with Hamas that has led Israel to freeze the U.S.-brokered peace talks.

âTurkey will continue supporting a just and permanent peace in the region on the basis of a two-state resolution vision and being in solidarity with the fraternal Palestinian people in their struggle for having an independent and sovereign state,â the ministry statement concluded, reiterating Turkeyâs well-known position.