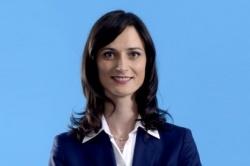 Gabriel said she considered the choice by EPP members to be "a recognition of the active role that GERB plays in the biggest European political family."

It is also "a recognition of the convincing victory at the European elections in Bulgaria," which "contributed to another victory for EPP in Europe," she added.

Mariya Gabriel assumes the position after the EPP group elected its previous Vice-Chariman, Manfred Weber, as new Chairman at its session on Wednesday.