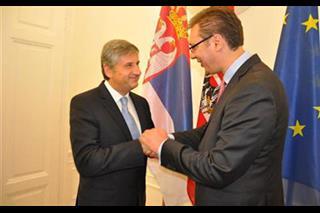 VIENNA - Serbian Prime Minister Aleksandar Vucic has said in Vienna on Wednesday that Serbia, and other countries in the region that were affected by the recent severe flooding, needs solidarity and assistance from the EU.

Serbia has nothing against applying together with Bosnia-Herzegovina and Croatia for assistance from the EU solidarity fund, Vucic told reporters after talks with Austrian Vice Chancellor and Finance Minister Michael Spindelegger.

He noted that the catastrophic floods that hit Serbia in mid-May destroyed the road and railway infrastructure, and that Serbia will need much assistance for their repair.

I can say that the consequences of the floods are severe, especially for the energy sector, road and railway infrastructure, but the agriculture industry has also been hit badly, the Serbian prime minister said.

He preferred not to give further estimates about the extent of the damage, but explained that Serbia will assess the damage together with international organizations as the country wants it to be realistic.

According to the initial estimate by the European Bank for Reconstruction and Development (EBRD), the damage stands at around EUR 2 billion, Vucic said, noting that is a huge sum for Serbia.

He thanked Austria for the major financial assistance that it has given to Serbia so far, noting that it is from Austria that Serbia got one of the biggest donations.

Vucic said that now Serbia needs drying machinery and other specific support, adding that he discussed the matter with Spindelegger.

We will not be able to manage on our own. We need solidarity and assistance from the EU. I hope we can count on that, the Serbian prime minister concluded.