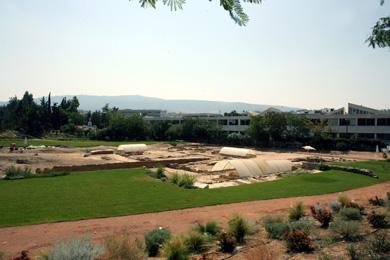 One of the sites on the "Green Cultural Routes" program organized by the Culture Ministrys Directorate of Museums, Exhibitions and Educational Programs Department is Aristotles Lyceum, which opened its doors to the public on Wednesday after an introductory event last month aimed at acquainting the public with the site and the tour.

The tour was led by the head of the Third Ephorate of Classical Antiquities, Eleni Banou.

The Lyceum, located between the Officers Club, the Athens Conservatory and the Byzantine Museum on the junction between Rigillis Street and Vassileos Constantinou Avenue will be formally inaugurated later in the summer, but is currently open to visitors from 8 a.m. to 8 p.m. daily. Admission is free of charge.

Aristotles Lyceum is believed to have been established as the ancient philosophers seat of learning in 335 BC.

Signposts located at the site are insightful, informing the public about the history of the site that Aristotle rented in order to set up his Peripatetic School, a part of the Lyceum. They also provide information on the three big compounds of Ancient Athens  the Academy, the Lyceum and Cynosarges  used for the physical and mental exercise of the citys youth and men.

The Lyceum (first brought to light by archaeologist Effi Lygouri in 1996), was an overgrown suburb of ancient Athens named after a nearby temple dedicated to Apollo Lyceus. The archaeologists of the Third Ephorate of Classical Antiquities, which is responsible for the site, want it to become a part of Athenians everyday life, a place where visitors can take a walk, rest or read.

Our reasoning is that we dont want people to be afraid of interacting with the site, Banou said during the tour. The Lyceum is a new...