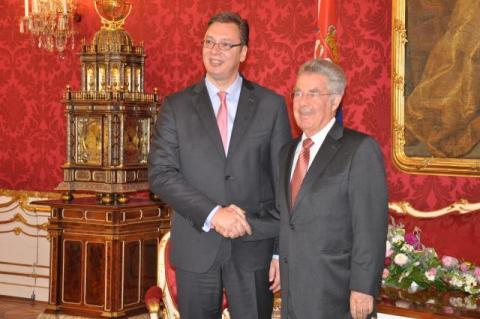 Vučić told the RTS that his Austrian hosts fully support the economic reforms in Serbia, as well as the necessary political reforms.

There were also discussions with businesspeople and major Austrian companies, including those that are already operating in Serbia, but also some that have plans to do so, he said.

"I think that our relations with Austria are perhaps better than ever in the past hundred years - on the centenary of World War I, we were greeted as friends, and it was a pleasure to represent Serbia," the prime minister said.

Asked if the visit can be considered as a way of preparing his upcoming visit to Berlin, Vučić said that he did discuss the visit with Austrian Vice Chancellor Michael Spindelegger, adding that Spindelegger's and German Chancellor Angela Merkel's parties are part of the European People's Party bloc and that he expects the Serbian Progressive Party to join it by the end of the year.

"We discussed cooperation involving Serbia, Austria and Germany," the prime minister said, adding that it is no coincidence that the Serbian leadership arranged the first visits to EU countries in that order.

Head of the Konrad-Adenauer-Stiftung offices in Serbia and Montenegro Henri Bohnet has said he expects the chief topics of the...