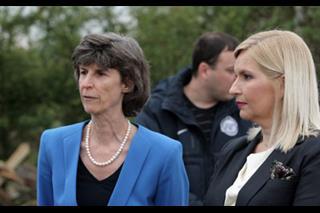 BELGRADE – A World Bank (WB) loan of USD 250 million to support Serbia's budget resources could become available in September of this year, provided the Serbian government made every effort to tackle the problem of restructuring enterprises as soon as they can, Laura Tuck, WB’s vice president for Europe and Central Asia, has said.

The World Bank is urging Prime Minister Aleksandar Vucic to deal with the problem of these enterprises rapidly and efficiently as this is a vital requirement to authorize the loan for Serbia, Tuck said.

We are speaking about 157 enterprises in restructuring causing huge budget expenditures, she said.

Recent amendments to the privatization law are a good first step in solving this problem. The next thing to do is prepare plans for each of those enterprises and help them deal with outcomes in terms of unemployment and workers’ compensation to be sure everything is addressed appropriately, Tuck said.

We first need a firm macro-fiscal framework and reforms, said Tuck, who paid a two-day visit to Belgrade this week.

Tuck said it would be good if Serbia concluded an arrangement with the International Monetary Fund (IMF).

The IMF agreement is conditional on a stable macroeconomic and sustainable fiscal situation and the World Bank requires the same. The arrangement with the IMF is not a requirement for our loan, but it is desirable, said Tuck, adding that a WB delegation talked with Prime Minister Vucic about loans for growth and competitiveness that would focus on improving the business climate.

Given that the government’s plan to have the reform bills enacted in the parliament during the summer is carried through and reforms follow, the USD 250 million loan...