US warns of 'tough choices' in Iran nuclear talks 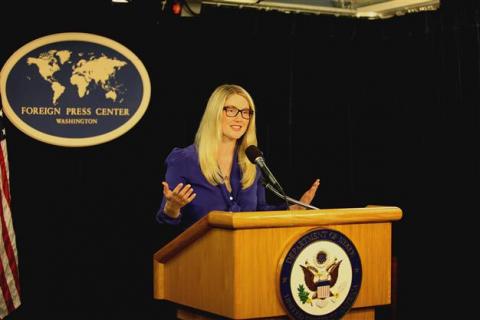 Iran and the United States go into a second day of talks June 10 on Tehran's contested nuclear programme, with Washington warning of "tough choices" ahead of a July deadline for a deal.

The closed-door two-day meeting in Geneva, which began June 9, marks a new effort to find common ground between Tehran and Washington, amid concerns that tensions between the two could damage efforts to strike a deal between the Islamic republic and world powers.

As the first day of talks drew to a close, Washington acknowledged that time was running out.

"We think we've made progress during some rounds, but as we said coming out of the last one, we hadn't seen enough made. We hadn't seen enough realism, quite frankly, on the table," said Deputy State Department spokeswoman Marie Harf. "We know we don't have a lot of time left. That's why we've said diplomacy will intensify," Harf said.

"People need to make tough choices, but we are very focused on that July 20th time."

The Geneva meeting marks the first time since the 1980s that Tehran and Washington have held official, direct talks on the nuclear issue outside of the P5+1 process.

For Iran, the goal is to make a leap towards ending the international sanctions that have battered its economy. Washington and its fellow powers are seeking solid commitments that will ensure Iran's stated desire for a peaceful atomic power programme is not a covert attempt to build a nuclear bomb.

Time is running out for Iran's negotiations with the so-called P5+1...