Political, military ties to be discussed at SEDM meeting 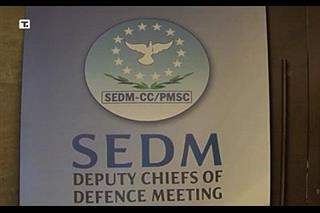 BELGRADE - A meeting of deputy chiefs of staff, attended by delegations of 15 countries participating in the Southeastern Europe Defence Ministerial Process (SEDM), started in Belgrade on Wednesday.

The meeting is attended by the delegations of Albania, Bosnia and Herzegovina, Bulgaria, Greece, Italy, Macedonia, Romania, Turkey, United States, Slovenia, Ukraine, Croatia and Montenegro, as well as Georgia as an observer country.

The meeting was opened by the state secretary of the Serbian Ministry of Defence Zoran Djordjevic, who said that Serbia is devoting particular attention to cooperation with neighbouring and regional countries as all countries involved face the same or similar security challenges.

Serbia is today present in all regional security initiatives, as well as in many activities, which indicates a clear orientation, Djordjevic said.

The floods that recently hit Serbia, Bosnia and Herzegovina and Croatia have shown that defence cooperation is imperative in the present times, he also said.

The chairman of the meeting, the state secretary of the Romanian Ministry of Defence Major General Valeriu Nicut, said that the participants will discuss matters of great significance to political and military cooperation in the region.

He expressed confidence that the meeting will contribute to boosting the efficiency of the SEDM initiative in both the political and military sense.

Also participating in the meeting are delegations of international organisations, including UN and NATO representatives.