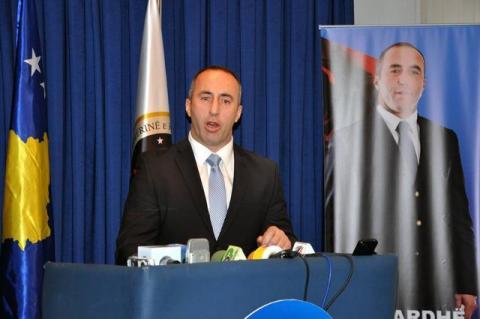 PRIŠTINA -- In order to remain in power Hashim Thaci has offered a coalition agreement and the PM post to Ramush Haradinaj, leader of the Alliance for the Future of Kosovo.

These claims, carried by local media in Priština, came after Tuesday's reports that Haradinaj had forged a coalition leaving Thaci and his party out.

Thaci now serves as prime minister and his Democratic Party of Kosovo won in Sunday's election with just over 30 percent of the vote - not enough to form a government on their own.

However, the Democratic Alliance of Kosovo and the Initiative for Kosovo wish to see him leave the post of prime minister and refused to form an alliance with him, turning to Haradinaj, whose Alliance for the Future of Kosovo came in fourth in Sunday's polls.

These three parties, led by Haradinaj, Isa Mustafa, and Fatmir Limaj, announced on Tuesday they had reached a deal to form a government.

Their candidate for prime minister is Haradinaj. However, Thaci's party said that "the constitution of Kosovo was clear" and that only they could have a mandate to put together a goverenment as they had won in the election.

President of the Constitutional Court Enver Hasani was then quoted as saying by some media in Priština that a mandate can be given "only to a coalition formed before elections and which had won the majority of votes."

But other experts, including lawyer Azem Vlasi, disagreed, saying the deal was "constitutional."

The latest reports, carried by Albanian language websites Express and Gazeta Blic quote "reliable sources" and say that Thaci has offered Haradinaj the post of prime minister - but that it was...

Epidemiologist Kon: The situation is still uncertain, despite improvement in numbers

"Of course I'm against it. Who in their right mind would think of that?"

The Crisis Staff will no longer hold press conferences every day

Crisis Staff: "Lifting of measures possible only when the numbers get better" VIDEO