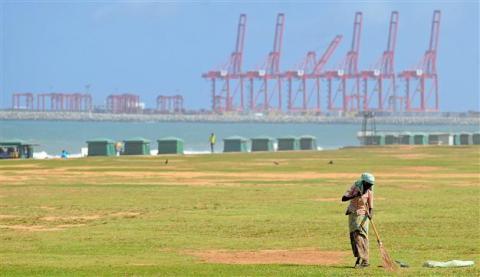 A Sri Lankan cleaner sweeps the ground at the Galle Face Green in Colombo on June 10. The World Bank slashed its 2014 growth forecasts in its biannual Global Economic Prospects report. AFP Photo

Citing tough winter conditions in the U.S. and the Ukrainian crisis, the World Bank has lowered its 2014 growth forecasts for the global economy, also darkening its view on the Turkish economy.

In its biannual Global Economic Prospects report, the World Bank slashed its Turkish growth forecast from 3.5 to 2.4 percent for this year, also trimming 2015 and 2016 estimations.

âIn Turkey, industrial output continued to expand in the first three months of the year, helped by strong export growth. But momentum has slowed, weakening business and consumer confidence to softening domestic demand ahead. In addition, higher inflation and past currency weakness are constraining private consumption and investment,â the bank said in the report.

Despite a series of recent forecast cuts by international organizations, the Turkish government maintains its year-end target of 4 percent.

On June 10, the countryâs first quarter growth was announced as 4.3 percent, supporting the governmentâs hopes.

Turkey was only one of the developing countries for which the World Bank expects a slowdown.
Most of the pick-up in growth this year will come from high-income countries, particularly the United States and the 18-nation Eurozone, the bank said in the report.

But a rough start to the year with bad weather in the United States, financial market turmoil and the Ukraine crisis dragged down global growth for the year as a whole, it noted.
It marked down its 2014 forecast to a 2.8 percent pace from its January forecast of 3.2 percent. The global economy grew 2.4 percent in 2013.

High-income countries would see a stronger growth this year of 1.9 percent from 1.3 percent of the previous year, the World Bank said.