Megatrend rector urged to "respond, or step down" 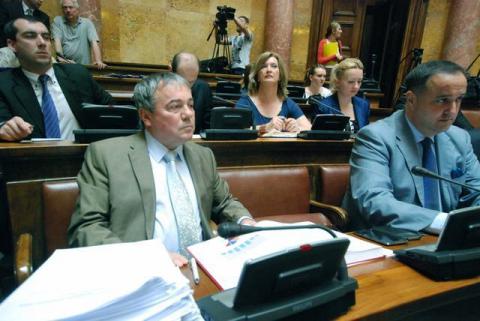 Megatrend rector urged to "respond, or step down"

BELGRADE -- The London School of Economics has no record of a doctoral thesis authored by the rector of the private Belgrade-based Megatrend University, Mića Jovanović.

This was announced on Thursday by Serbian Education Minister Srđan Verbić.

In the wake of these findings, Verbić called on Jovanović to "respond to these claims, or step down as rector."

Jovanović's academic credentials were first brought into question over the weekend when the website Peščanik quoted several Serbian scientists working in Britain, who said they suspected his claim of earning a doctoral title at the University of London in 1983 were false.

Jovanović was the mentor of Interior Minister Nebojša Stefanović when he prepared his own doctoral thesis at the Megatrend University - the source of another controversy, as the Peščanik website previously accused him of plagiarizing his work - something the high-ranking SNS party official stringently denies.

Minister Verbić noted on Thursday that "a person who violated academic norms of ethics" cannot serve as rector - but stressed that considering that Jovanović did earn the second doctoral title quoted in his biography - that from a faculty of the University of Maribor in Kranj, Slovenia - "the diplomas of the persons he mentored have not been brought into question."

Verbić also called on the authorities to determine if the case contained "any criminal elements."

The minister explained that Jovanović's credentials were checked via the European Network of National Information Centers for Academic Recognition and Mobility, and confirmed the Kranj doctorate, dated 1991, but could find no proof...