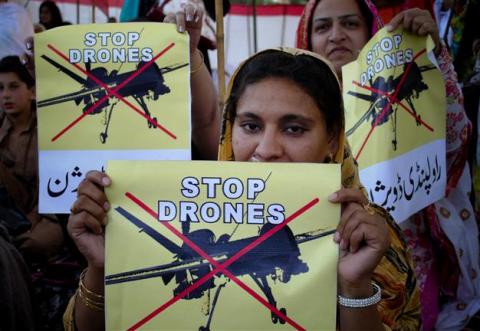 Pakistan women take part in a rally against the US drone strikes in Pakistani tribal areas in Peshawar. The latest drone strikes sparked swift condemnation by the Pakistani government. AP photo

Pakistan condemns the first US drone strikes on its soil this year despite suspicions the two countries coordinated over the attack in the aftermath of a Taliban siege of Karachi airport Missiles from U.S. drones slammed into militant hideouts overnight in northwestern Pakistan, killing
13 suspected insurgents and marking the resumption of the CIA-led program after a nearly six-month break, officials said June 12.

The two separate drone strikes sparked swift condemnation by the Pakistani government. The Foreign Ministry said in a statement that the strikes, are a violation of Pakistani sovereignty and territorial integrity.

They came in the same week as the Taliban claimed responsibility for an all-night siege of Karachi airport that left 37 dead including 10 attackers, shredding a nascent peace process and placing pressure on Islamabad to react decisively. Pakistanâs northwest, particularly North Waziristan, is home to numerous militant groups, both local and al-Qaeda-linked foreign groups, who often work together, sharing fighters, money or expertise.

There was no immediate information on the identities of those killed in the strikes but the two intelligence officials who gave information about the strike said the area is dominated by the Haqqani network.

The Haqqani network is believed to carry out operations...

Thousands of migrants look for way around shut Greek border