Minister says Jovanovic must give explanation or resign 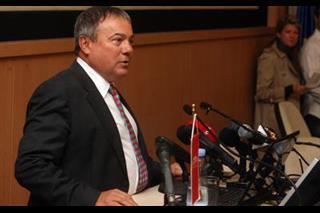 Addressing a press conference on Thursday, Verbic also urged the authorities to establish if there are elements of a criminal act.

In his official curriculum vitae, the Megatrend rector stated that he first received a doctor's degree in management and industrial relations from the University of London in 1983 and that he also went on to obtain a doctor's degree from the Faculty of Organizational Sciences in Kranj in 1991.

Checks via the education ministry's ENIC centre have shown that the database of the London School of Economics and Political Science contains no doctoral thesis written by Jovanovic or any indication of his registration as a doctoral student, Verbic said.

Also, the University of London has no degree awarded to Jovanovic, Verbic said, calling on Jovanovic to explain these claims or resign as rector.

"Under the Higher Education Act, a person who has breached the code of professional ethics cannot be a university rector," the minister said, noting that Jovanovic's resignation will not necessarily lead to Megatrend losing its accreditation.

The Megatrend University is currently in the process of re-accreditation - they have submitted their documentation duly and the process is under way, Verbic said.

Asked about the fate of doctoral students whom Jovanovic is mentoring, Vrbic responded that the matter is not in the competence of the...