Plan of participation in UN and EU missions adopted 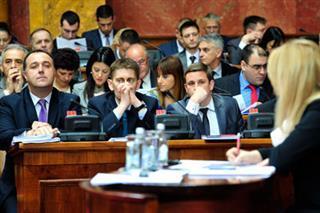 BELGRADE - The Serbian parliament adopted on Friday a number of laws related to trade and telecommunications, a law regulating how travel papers are issued and a plan for military and police participation in UN and EU operations.

The parliament adopted an annual plan for the use of the army and other defence forces in multinational operations in 2014.

These documents allow the Serbian troops to take part in seven new UN and one new EU operation this year, besides the six UN and two EU operations they are already involved in.

The new missions, whould Serbia be invited to join, will be in Western Sahara, Mali, Kashmir, South Sudan and Sudan, which would mean raising the number of Serbian troops in international missions from the current number of around 300 to around 420.

Consumers will now be able to demand refunds 6 months after the purchase.

The second reason for the changes made to this law is that the Constitutional Court has determined that some provisions of the law related to the data being kept are unconstitutional and violate the right to privacy in electronic communications.

The amendments to the law on travel documents were adopted to harmonise the procedure for passport issuing with EU standards.

The revocation of exit visas also ends the need for ship and naval papers where the visa was introduced as a type of...