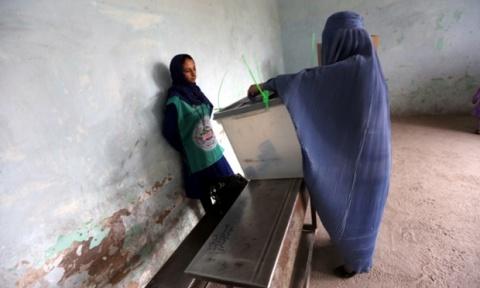 Afghans headed to the polls on Saturday morning to choose a successor to President Hamid Karzai in a second round of presidential elections.

The run-off election is the second voting day in less than three months after no candidate won more than 50% in the April poll.

The last vote was hailed as a huge success after voters turned out in unexpectedly high numbers and a barrage of Taliban attacks did little to disrupt polling.

The vote pits former anti-Taliban fighter Abdullah Abdullah against ex-World Bank economist Ashraf Ghani after neither secured the 50 percent majority needed to win outright in the first round on April 5.  Back then Abdullah won 45% of the votes and his rival Ghani got 32%.

There were fears on Saturday that voters might stay away after the emotion of the first round dissipated and the Taliban ramped up their threats. But the weather co-operated and on a sunny morning queues formed outside polling stations around the country before their 7 a.m. opening.