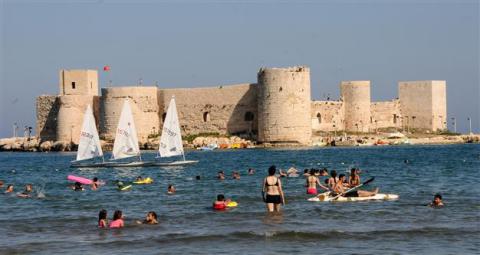 TÃRSAB predicts the share of local tourists in hotels will rise up to 40 percent in Bordum, while it will remain at around 15 percent in Antalya resorts. AA Photo

With the aim of compensating for its losses from decline in European tourists, the Turkish tourism sector will try to allure local tourists.

This summerâs season is expected to witness a boom with the Ramadan holiday, according to a report released by the top sector organization.

â2014 Tourism Season Reportâ released by the Association of Turkish Travel Agencies (TÃRSAB) says the tourism sector is suffering from a retreat in some markets including Germany, Ukraine and Belgium and looks to raise the number of Turkish tourists.

âThe sector will have up to 30-40 percent price reductions during Ramadan in order to not leave their business up to chance,â the report read.

The three-day Eid al-Fitr holiday, also known as the Ramadan Holiday, will fall between July 27-30 this year, creating a five-day vacation opportunity at countryâs coastal beauties or culture attractions for local holiday makers.

According to the report, southeastern holiday town Bodrum and the southern province of Antalya that accommodates scores of shores will remain the favorite destinations for Turks who want to take a little time off.

The report predicts the share of local tourists in hotels will rise up to 40 percent in Bordum, while it will remain at around 15 percent in Antalya resorts.

Despite a decline foreseen in foreign tourists, the number of tourists to Turkey, which was 39 million in 2013, is expected to rise to a record high of 43 million this year, with a moderate increase in tourism income also projected.

A total of 57 million people mobility is expected for the whole year, according to TÃRSABâs calculations.
Nearly 5 million of 14 million...