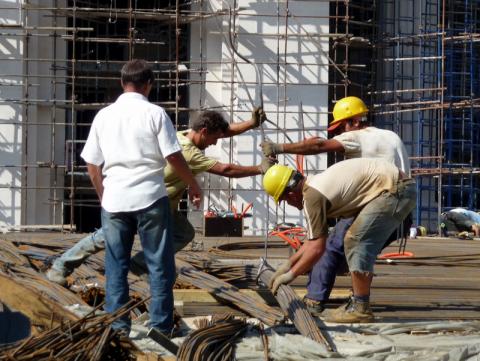 The construction sector is the driving force behind the economic growth | Photo by: Sinisa Jakov Marusic

The construction sector, which grew by 13.7 per cent in the first quarter of 2014, is seen as the main driver of the current growth rate, which matches official economic forecasts for the year.

The new government platform submitted by Nikola Gruevski after he won the April general elections set economic growth for this and next year at three to four per cent.

For 2016 and 2017, the government is even more optimistic. It predicts strong growth of up to six per cent, “unless unpredictable events on the world market” slow the economy.

The latest report by the World Bank, issued in May, said Macedonia’s economy grew by 3.1 per cent of GDP in 2013, well above the regional average of 2.2 per cent.

The achievement is even greater bearing in mind that in 2012, Macedonia saw two consecutive quarters of negative growth, largely as a result of the European debt crisis. It only exited recession at the end of 2012.

“We project quite strong economic growth… But the long-term strengthening of structural reforms would be important to sustain growth,” Doherty Demland of the World Bank said in May.

However, the World Bank warned that even with high economic growth levels, countries in south-east Europe will still need decades before their living standards reach European Union levels.

Even if regional economies grow by six per cent a year, which is highly unlikely, it would take more than two decades before living standards in the region reached EU averages.