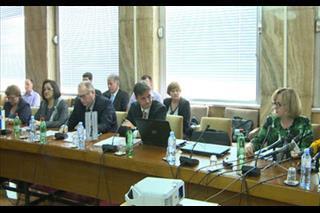 BELGRADE - The catastrophic floods which recently hit the region came as a warning to the countries along the course of the Sava River that they need to invest joint efforts to find a high-quality solutions concerning flood defence mechanisms, regional ministers agreed at the meeting in Belgrade on Monday.

Serbian Minister of Agriculture Snezana Bogosavljevic Boskovic said that Serbia is a country in the lowest reaches of the Sava River which is why flood protection and the water quality protection are exceptionally important.

”Good regional cooperation was particularly pronounced during the devastating floods that recently hit the Sava basin and resulted in considerable material damage in Serbia, Bosnia-Herzegovina (BiH) and Croatia,” she said.

The preliminary flood risk assessments have shown that there are 99 major floodplains in the territory of Serbia and the recent floods covered over one third of the areas, Bogosavljevic Boskovic said at a meeting attended by representatives of Serbia, BiH, Croatia, Slovenia and Montenegro.

”The protocol on flood protection with the framework agreement on the Sava River basin is being discussed by the Serbian government and its importance is reflected in the improvement of protection from the detrimental effects of waters on regional and national level, which creates the conditions for flood risk management,” she underscored.

BiH Minister of Foreign Trade Boris Tucic noted that the framework agreement for the Sava River basin constitutes the platform on grounds of which, according to BiH assessment, significant results were achieved in the previous ten years.

He pointed to the importance of continuation of launched adjustment procedures and closing...