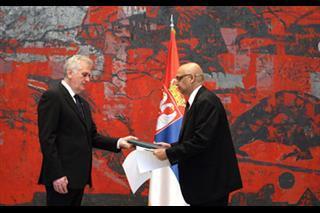 BELGRADE - Newly-appointed Pakistani Ambassador to Serbia Arif Mahmood stated on Monday upon presenting credentials to Serbian President Tomislav Nikolic that Islamabad is committed to further strengthening of relations with Serbia in all areas of mutual interest, economy and trade in particular.

Ambassador Mahmood said that the two countries have good friendly relations, adding that Pakistan highly appreciates the stability and maturity of the political system, people's trust in state institutions and the new government's focus on economic development and regional integration which, as he put it, will yield numerous benefits for Serbia and its neighbors.

He expressed deep condolences to the Serbian government and people regarding the tragic loss they suffered in the recent floods.

Nikolic underlined that Serbia has identified the EU integration process as its foreign policy priority, but at the same time it wants to cherish and develop good relations with all countries in the world.

“Serbia is ready to foster dialogue and cooperation with Pakistan in all areas of mutual interest particularly in the sphere of economy,” Nikolic said.