Chinese PM eyes investments ahead of landmark visit to Greece 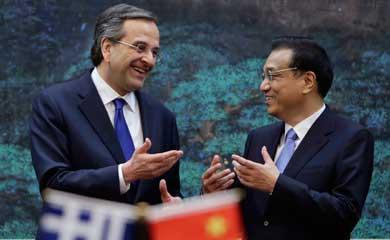 Just over a year after Prime Minister Antonis Samaras visited China to seek investment, his counterpart Li Keqiang is due in Athens on Thursday for a three-day visit during which both sides are expected to reaffirm their commitment to boosting bilateral trade ties with several agreements expected to be signed.

Li, who is to be accompanied on his visit by a 14-member government delegation, noted in a letter published in Wednesdays Kathimerini his intention to open up new prospects for a deeper China-Greece relationship.

Describing the Greek and Chinese economies as mutually complementary, the Chinese premier said he saw huge potential for cooperation. A key aim is to expand the Chinese presence at Piraeus where the firm Cosco is already active, he said, declaring that the Chinese will work with Greece to make the port the best of its kind in the Mediterranean. Li also expressed interest in airport, rail, road and other infrastructure development" as well as in maritime transport, logistics and shipbuilding. He described tourism as an important growth area for China-Greece cooperation, noting that officials from both sides would sign an agreement foreseeing the creation of cultural centers to facilitate people-to-people exchanges.

On Friday the two leaders are scheduled to visit Coscos facilities in Piraeus in a highly symbolic appearance as the firm is aiming to acquire 67 percent of the Piraeus Port Authoritys share capital.

Later on the same day, the two men are due to address a forum exploring opportunities in shipping, investments and trade. In another...