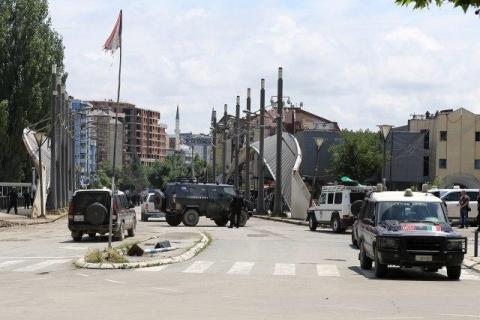 KOSOVSKA MITROVICA -- KFOR has welcomed the removal of a barricade built on the main bridge in Kosovska Mitrovica as a positive step that can be beneficial to reconciliation.

The NATO-led forces in Kosovo stated that hard work should be done to support dialogue and democratic discussions that lead would lead to stability of Kosovo.

The meaning of the desire to keep the bridge closed to the passage of vehicles, by means of building a park there, "is very symbolic and politically motivated," said a statement issued late on Wednesday.

KFOR "will continue to contribute to a safe environment on the bridge," it added.

The NATO mission in the province said that the barricades were removed "with the support of residents of North Mitrovica," without incident and in a peaceful manner, and that "the former barricade was replaced by a park."

"KFOR welcomes the decision to remove the physical barrier on the bridge 'Austerlitz'. Building a park on the site interferes with the freedom of movement of vehicles, but there are alternative routes and bridges in Mitrovica, as was already the case," the statement said.

During the morning hours on Wednesday, KFOR sent more troops to the scene to act as backup and monitor the situation, in terms of avoiding incidents of any kind, "because large groups of people gathered on the north and the south side out of curiosity."

The main bridge on the Ibar River connects the southern, Albanian, and the northern, mostly Serb part of the ethnically divided town.

Northern Kosovska Mitrovica Mayor Goran Rakić said on Wednesday that he had "adopted the decision to...