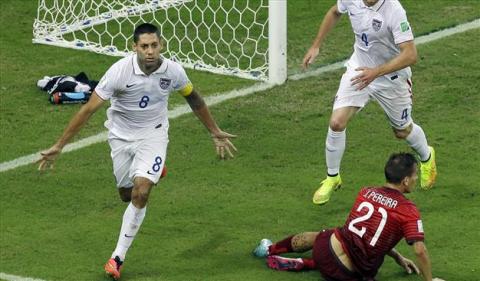 Portugal snatched a dramatic equaliser deep into injury time to force a 2-2 draw with the United States and keep their World Cup hopes flickering on June 22.

Varela headed in a cross from Portugal captain Cristiano Ronaldo in the fifth and final minute of stoppage time at the Amazonia Arena in Manaus to grab a vital point.

The last-gasp leveller deprived the United States of a famous win which would have seen them complete a remarkable qualification from Group G, which also includes Germany and Ghana.

It also saved Ronaldo and Portugal from an embarrassing first round elimination from a group they were firmly expected to qualify from.

The result leaves the United States and Germany level on four points in Group G, with Portugal and Ghana on one apiece. A draw between the Germans and Americans in the final round of matches on Thursday would see both teams advance.

U.S. coach Jurgen Klinsmann hailed his team's heroic display.  "Obviously the last second is unfortunate but my guys were magnificent," he said.

"We just have to get a result against Germany." The Americans were left cursing a late equaliser just seconds from the final whistle after a battling performance.

Portugal winger Nani had shot the Europeans into the lead on five minutes but Klinsmann's side rallied thereafter and dominated for long periods.

They got their reward when Jermaine Jones equalised on 64 minutes with a rasping shot. Then nine minutes from time Dempsey chested in a shot to put the US 2-1 up.

It seemed as if that would be enough for victory but Portugal poured forward with one last desperate attack to score.

In other games June 22, teenager Divock Origi fired Belgium into...