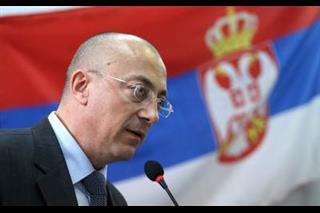 NORTH KOSOVSKA MITROVICA - Mayor Goran Rakic called on the citizens of North Kosovska Mitrovica to remain calm and not to fall for provocations aimed at drawing the north of Kosovo-Metohija (KiM) into conflicts and violence.

Rakic urges for calm in the wake of violent protests staged by Albanians in south Kosovska Mitrovica on Sunday where a lot of people got injured.

Considering the seriousness of the situation after yesterday’s unrest, Mayor Rakic is calling on Serbs to preserve dignity, as always, and to maintain peace, order and stability in their neighborhoods.

Rakic extended yet another call for dialogue to Albanians, saying that it was the only possible option.

“Only through talks can we arrive at a solution to the problem and that is why the Serbian people have extended the hand of friendship to all people of Kosovo-Metohija who find safe and secure life for their families to be their most important goal," he said.

Several people have been injured and a number of cars set on fire in violence that broke out during a protest by ethnic Albanians on the southern side of the main bridge in Kosovska Mitrovica on Sunday.

A barricade was removed on June 18 and a peace park built in its place on the main bridge on the Ibar River, which connects the Albanian and Serb parts of the city. The bridge is now opened for pedestrians, but it is still closed for transport.