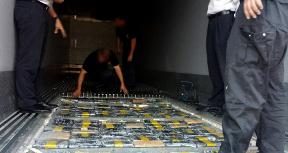 Customs officials discovered the cocaine in the false floor of the shipping container. [Montenegro Customs Administration]


The recent seizure of 250 kilograms of cocaine in Bar shows that the country is serious about beating crime and corruption.

Officials are calling a police operation this month at the port of Bar in Montenegro a significant action against organised crime and narcotics trafficking in the region.

On June 6th customs officers seized 250 kilograms of cocaine smuggled beneath a shipment of bananas. The shipment, which was sent by Vimtcorp Company in Ecuador, was destined for Rrapo Company in Albania. "Officers used the specialised tools for detecting narcotics and noticed that the floor of the container was a special compartment packed with 223 packages of cocaine. Police are conducting further actions in co-ordination with the prosecutor's office," Vladan Jokovic, director of Montenegro's Custom Administration, told SETimes.

Police said the destination of the drugs was France or Italy, and the traffickers had planned to leave the goods in Albania and return the empty containers to their destination, trying to erase all the tracks.

"This seizure is a good example of the government recognising the priorities that must be undertaken by the state. It is time for the authorities to show specific willingness and to do things like this seizure because the EU will closely follow the field of combating crime until the end of accession negotiations," Genci Nimanbegu, member of the parliament committee for European integration, told SETimes.

The operation is particularly significant as NATO...