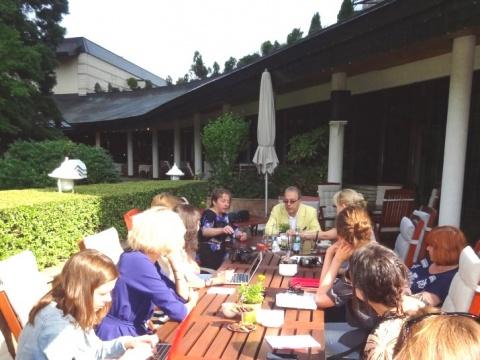 Photo by the Ministry of Economy and Energy.

Bulgaria's Deputy Economy Minister Branimir Botev has met with Russian journalists and informed them of the situation in Bulgarian resorts after last week's devastating floods.

Deputy Minister Botev invited the journalists on a week-long tour along the route of Sofia-Plovdiv-Gabrovo-VelikoTarnovo-Varna-Albena-Balchik-Pomorie in order to get acquainted with the situation in the Bulgarian cities and resorts, as well as to meet with representatives of local authorities and with Russian tourists, the Economy Ministry press center informs.

“You will be able to see for yourself that there is no need to panic and that the season is going well,” Botev said at the meeting.

The Deputy Minister pointed out that no tourists were injured during the floods in Bulgaria. The torrential rains that hit eastern Bulgaria and the Black Sea coast last week, have caused damages in only two resorts north of Varna - Albena and Kranevo, he said. Meanwhile, a total of 103 children from Russia and Ukraine were staying in a hotel in Kranevo which was partially flooded. They were immediately accommodated in a better hotel.

Russian tourists' interest in Bulgaria is traditionally high, Branimir Botev added. Nearly 700,000 Russians visited the country last year. Some 420,000 Russian citizens own a second home in Bulgaria and have a status of residents.