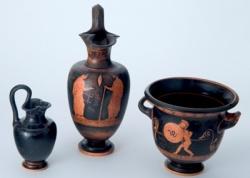 Bulgaria's Archaeological Museum in the Black Sea town of Sozopol will exhibit 24 valuable artifacts of the earliest ancient history of the town in the French Louvre Museum.

The exhibition will open in 8 months and will showcase unique vases and kraters dating back to the VI century, which are the best preserved examples of ancient craftsmanship worldwide, the official website of Sozopol municipality informs.

Among the exhibits is a tomb from the town of Sozopol necropolis,dating to the middle of VI century, along with figures of people, animals and everyday objects, which were buried next to the first inhabitants of the ancient city of Apollonia.

The regional museum in the Black Sea city of Burgas will also exhibit archaeological artifacts in the Louvre Museum. The French experts organizing the exhibition have chosen the goddess Cybele relief found near Sozopol in the first half of the 20th century dating to the 5-4 century BC, as well as a marble statue of a male figure with no head which is the most ancient statue found in the area.