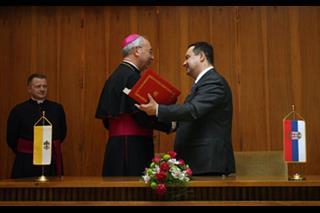 At a joint press conference after the signing ceremony, Dacic said that it would be in the interest of the state of Serbia that Pope Francis visits the country at state level, adding that he could not speak about relations between the Catholic and Orthodox Churches.
“I think that the agreement is a step forward in the sense that in our relations we as a state lacked the courage for a long time to speak in line with our interests,” the first deputy prime minister said.

“It is in the interest of our state to find the best possible conditions for dialogue and visits of top church dignitaries and state officials,” Dacic stressed.

Dacic also thanked the Vatican for support to Serbia in relation to the non-recognition of Kosovo's independence, and the aid sent to the Serbian people after the recent severe floods.

The Holy See's Secretary for Relations with States, Archbishop Dominique Mamberti, said that his visit to Serbia is a sign of good relations between the Holy See and Serbia, but also a confirmation of a constructive dialogue that the Vatican would like to have with Serbia.

The agreement that has been signed today is another special proof of good cooperation, as it states that the two sides will work on fostering and encouraging cooperation and dialogue, Mamberti said, underscoring that the document encourages cooperation in the important field of tertiary education.

According to Mamberti, the...