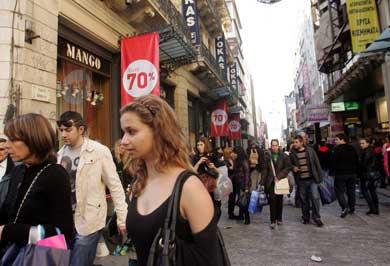 Retail sales in Greece rebounded in April, data showed on Monday, with Easter shopping helping to post the strongest rise in more than two years.

Retail sales by volume rose 7.3 percent year-on-year after a downwardly revised 1.2 percent drop in March, according to statistics service ELSTAT.

Greek economic data have begun to show signs of a turnaround in recent months after a six-year recession that depressed incomes and drove down consumer spending.

The improvement in consumer confidence, stronger tourism and the coincidence of the Orthodox and Catholic Easter holiday brought about the best retail sales reading since March 2010, he said.

Improved consumer confidence and the momentum in tourism should continue to positively affect consumer sales in the coming months.

Hit by austerity policies imposed by the European Union and International Monetary Fund who bailed out Greece, the economy has shrunk by almost a quarter over six years, suffering its most protracted recession since World War Two.

A key factor in the decline has been a 26 percent slump in household consumption as record unemployment and wage cuts slashed disposable incomes, with investment also falling sharply.

But first-quarter gross domestic product data have shown a positive contribution from consumption, which rose 0.8 percent year-on-year, supporting projections that the economy will emerge from recession this...