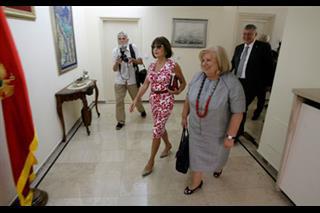 BELGRADE – By virtue of a decision by Serbia’s Agency for Restitution, Princess Jelisaveta Karadjordjevic moved to Villa Crnogorka in Belgrade, decades after its confiscation by the Yugoslav communist government in 1947, on Tuesday.

Villa Crnogorka, which served as premises of the Montenegrin Embassy and Residence, was returned to Princess Jelisaveta and Prince Aleksandar Karadjordjevic as its rightful owners based on their succession rights.

Princess Jelisaveta and Prince Aleksandar are children to Prince Pavle Karadjordjevic and Princess Olga, of the Romanov line, who owned the villa.

The villa handover and moving ceremony was attended by Prince Aleksandar II Karadjordjevic and his wife Princess Katarina, Prince Mihailo, son of Prince Tomislav, and his mother Linda, the royal family's press office said in a release.

Prince Aleksandar voiced hope that the rest of the confiscated property would soon be given back to the Karadjordjevics and many other families who had suffered the same injustice, the release said.

Mercator expected to become part of Fortenova by month’s end