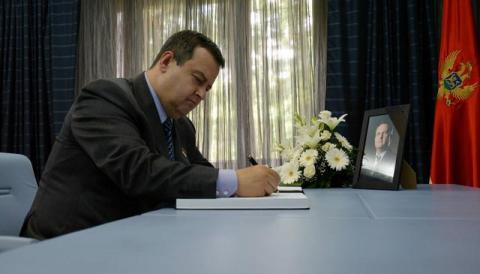 
BELGRADE -- Ivica Dačić signed on Thursday the book of condolences opened at the Montenegrin embassy in Belgrade following the death of Željko Šturanović.

Šturanović was a former prime minister and served as deputy speaker of the Montenegrin parliament and vice president of the ruling DPS party at the time of his death.

"On behalf of the people and the government of the Republic of Serbia, and on my personal behalf, I would like to express my condolences to the Parliament and the people of Montenegro for the loss of Željko Šturanović, a prominent politician who left a deep mark on the recent political history of the Montenegrin state,” the Serbian foreign minister wrote.

"With his passing, Montenegro has lost not only a politician, but a man worthy of respect, whose personal dedication, diligence and commitment has contributed greatly to the establishment of the modern Montenegrin society,” Dačić concluded in his message of condolences..

Šturanović passed away after a long illness at the Gustave-Roussy Institute in Paris on June 30.

Call for Minority Govt in Montenegro Gets Cold Shoulder