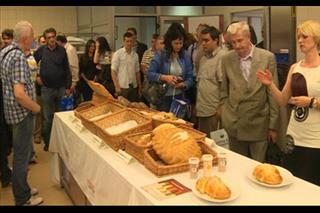 BELGRADE – Serbia’s capital Belgrade has seen Lesaffre Group, a French company with more than a century and a half of baking tradition, opening its first Baking Center in Serbia, which will serve as an educational center for bakery professionals in our country.

With Lesaffre, leader in the field of yeast and bread making and global supplier of yeast extracts and bakery yeast, opening the center in Belgrade, Serbia has joined a network of 30 technical centers on five continents.

All bakeries in Serbia, be they industrial or small and medium ones, will be entitled to use the center’s services.

The opening of the center on Thursday was attended by representative of the French Embassy to Serbia Francois Bonet, who pointed out that the French government aimed to make the country's economic ties with Serbia as firm as their political and historical ones.

The opening of the Lesaffre center is a typical example of good partnership, something we are obliged to develop, said Bonet, adding that French companies' presence in Serbia was important not only for investment but also for communication of skills and knowledge.

Lessafre Group has operations on five continents and has been present on the Serbian market since 2007, offering a broad range of yeast products and other additives for the baking industry.