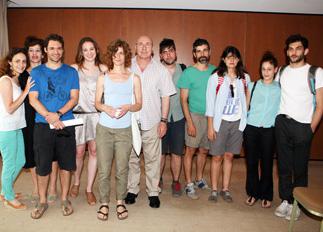 Greek Festival director Giorgos Loukos was surrounded by fresh faces at a recent press conference in Athens where he took the opportunity to introduce two new, albeit long-awaited, initiatives.

To begin with, Loukos announced that for the first time in the history of the Epidaurus Festival (now part of the Greek Festival), a certain number of Greek Festival productions will feature English surtitles. The second comes thanks to a special agreement reached between festival organizers and state bus company KTEL Argolidas which will allow members of the audience traveling to Epidaurus for certain performances to benefit from a 45 percent discount  the deal will see those heading to the ancient theater paying 10 euros instead of the 19-euro standard fare.

During the press conference Loukos also presented the two young directors whose production will serve as curtain raisers for the 60th edition of the Epidaurus Festival.

Karantzas, who directs Euripides Helen, worked on a translation executed by Dimitris Dimitriadis. The production features a group of nine narrators who undertake the task of exploring the themes and complications of the ancient play. The director appeared enthusiastic regarding his collaboration with a cast of young actors. If you dont come across understanding and complicity, there is no point to...