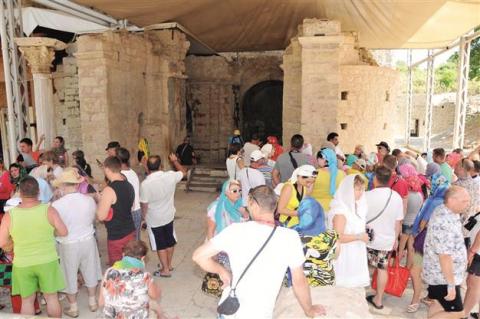 The Noel Baba Museum and the ancient Myra are the most popular tourist attractions in Antalya. DHA Photo

The Noel Baba Museum and the ancient city of Myra in the southern province of Antalyaâs Demre have broken visitor and revenue records for the first half of the year.

In June nearly 70,000 people visited the Noel Baba Museum, bringing in more than 700,000 Turkish Liras in revenue. The museum, which is the most popular tourist attraction in the city, was visited by 66,000 people in the same month last year, netting 643,000 liras in earnings. In the first half of the year, the museum received 219,000 visitors and made nearly 2.5 million liras in revenues.

The Noel Baba Museum was built in the fourth century A.D. and is regarded as holy, especially by Orthodox Christians. It is the only ancient structure with wall paintings in the region and draws the highest number of tourists from Russia. Russians are followed by Germans and other Europeans.

In the first half of the year, another record-breaking place in Antalya was the ancient city of Myra, one of the largest cities of the Lycian Union. Nearly 56,000 people visited the ancient city in June, providing an income of 573,000 liras.

Myra, which is very popular among tourists thanks to its surviving theater with a capacity of 13,000 people, rock tombs and theater masks on ancient stones, was visited by 187,000 people in the first half of the year. These visits brought in some 2.2 million liras in revenues. Last year nearly 182,000 people visited the ancient city, good for 1.9 million liras in earnings.

Among the visitors of Noel baba Museum, Ukrainian Elena Mihoilova said she had succcessfully given birth to a child after praying for divine intervention on the matter during a visit last year. âThis is why I came here this year to express thanks,â she said.

Biden-Zelensky Conversation did Not go Well