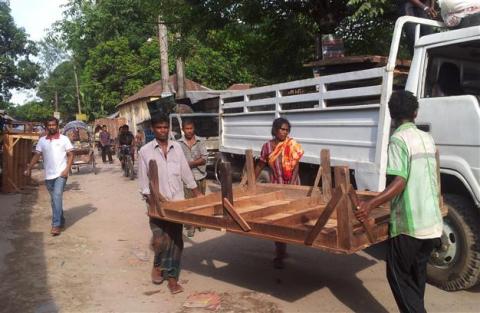 Bangladeshi residents carry away a bed as the 200-year-old Kandapara brothel is knocked down in Tangail on July 14, 2014. Bangladesh's oldest brothel has been shut down following pressure from local clerics and politicians amid rising conservatism in the Muslim-majority country, police said. AFP Photo

Bangladesh's oldest brothel has been shut down following pressure from local clerics and politicians amid rising conservatism in the Muslim-majority country, police said Monday.

More than 750 prostitutes in Tangail city were forced out of a cluster of houses that made up the 200-year-old Kandapara brothel on Sunday after the dwelling's owners ordered them shut, an officer said.

District police chief Saleh Mohammad Tanvir said the owners made the decision after Muslim clerics and civil activists staged a march last week demanding the eviction of the sex workers.

"On Sunday, the house owners of the brothel issued a notice ordering all the sex workers to leave the brothel. They left without any protest," Tanvir said.

Islamists and other activists, bolstered by a conservative upsurge, have shut down about a dozen brothels across the country in recent years including the largest at Tanbazar, outside the capital of Dhaka.

Prostitution is illegal in Bangladesh but the government has historically tolerated some brothels operating in the country.

Monowara Begum, who heads a sex-workers group at Kandapara, accused the local mayor, a ruling party official, of ordering the closure and threatening the women with violence.

"He (the mayor) sent dozens of young men to the brothel on Saturday. Armed with sticks, they told us that we have only one hour to leave the place or they would burn down the brothel with kerosene. After that owners started dismantling their houses," she said.

"The brothel's more than 773 girls were panicked. As they were leaving, their belongings such as televisions, fridges and furniture, which...

Bernard-Henri Levy: ‘How shall we avoid an epidemic of despair?’

Turkey brings back expats from Europe on eve of Ramadan