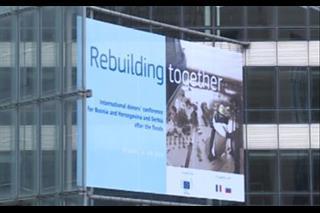 BRUSSELS - Three films about the May floods in Serbia and Bosnia-Herzegovina and about the reaction from the international community to the event marked the start of the Donor Conference in Brussels on Wednesday under the motto Rebuilding Together, which will be used to help repair the damage caused by the natural disaster.

The Serbian delegation is led by President Tomislav Nikolic, at whose initiative the conference was organised, while the Bosnia-Herzegovina delegation is headed by Chairman of the Presidency Bakir Izetbegovic.

They will present the official reports on the May floods in both countries.

The total damage from the disaster in Serbia is estimated to be at EUR 1.5 billion, while the damage in Bosnia-Herzegovina, where Republika Srpska was hit worse than the other political entity in the country, stands at EUR 2 billion.

Officials from European countries, the US, Japan, the UN, World Bank, EBRD and OSCE are at the conference.