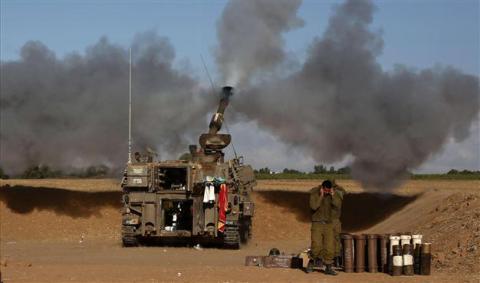 An Israeli self-propelled 155mm howitzer of an artillery unit located at an unspecified location next to the Israeli border with Gaza, shelling toward targets in the Gaza Strip, 17 July 2014. AFP Photo

Turkey and Qatar are forging a plan to produce a truce between Palestinian groups and Israel to end 10 days of violence in Gaza amid additional efforts from Cairo.

Meanwhile, an Israeli official, speaking on condition of anonymity, said his country and Hamas âhave agreed on a cease-fireâ that would begin on July 18, but Hamas denied the report.

âThe news about a cease-fire is incorrect. There are continuing efforts but no agreement until now,â spokesman Sami Abu Zuhri told Agence France-Presse in Gaza.

Turkeyâs efforts with Qatar are on a parallel track with Egypt to seek a truce between Israel and Palestinian groups, a Turkish diplomat told the HÃ¼rriyet Daily News.

A truce cannot be sustainable if the embargo on Gaza is not lifted, DavutoÄlu said, noting that Israel should also âbe accountableâ as part of a cease-fire deal.

The proposal brokered by Turkey and Qatar aims to include elements of a 2012 agreement and effect the release of Palestinian political prisoners, requested by Hamas, according to a Turkish official.

Hamas leader is insistent on the release of prisoners, who were freed as part of an agreement for the release of Israeli soldier Gilad Shalit in 2011, but recently again detained by Israel, according to Turkish officials who wanted to remain anonymous.