Sunken city of Kekova to be open to swimming and boats 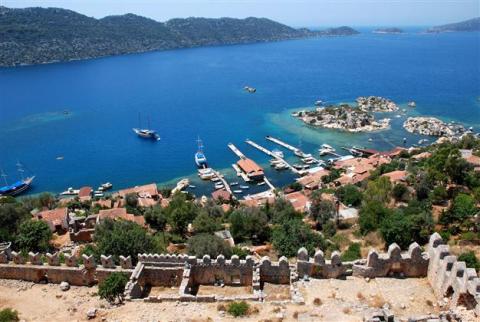 Kekova, which draws tourists and divers due to its beautiful nature and the sunken city which is visibly even from the shore in some parts of the town, has become a new favorite haunt for underwater lovers or those stopping off while taking a cruise. After cruising with boats, holidaymakers can dive into the depths of the sea to explore the underwater world with professional divers.

The Sea Tourism Board which works under the Demre District Governorâs Office has taken several decisions on the area to increase interest and solve localsâ problems.

The board decided that two areas located in the nearby village of KalekÃ¶y (ancient Simena) will be opened to swimming. The board also decided to allow daily boat trips to the sunken city and Simena starting next year. Trips to the shores where the sunken city is visible were banned until the new decisions. The ports in the KalekÃ¶y will also be renewed.

The board also decided that the microphone sounds of the daily trip boats should be lowered in order to decrease the sound pollution in the small villages and resort town.