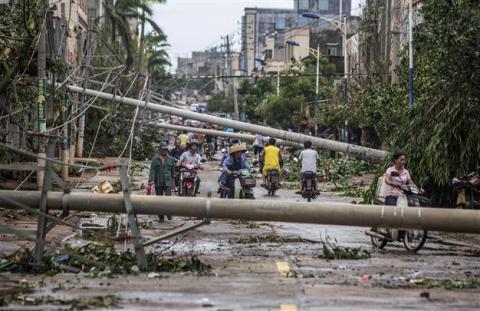 The death toll from the strongest storm to hit China in decades has reached 17, state media said Sunday, as forecasters issued warnings of more extreme weather.

Typhoon Rammasun has left eight people dead in the island province of Hainan and another nine in Guangxi, official news agency Xinhua reported.

State media said Saturday evening that eight people had been killed in the storm.

The typhoon first made landfall in China on Friday afternoon as a super typhoon, packing winds exceeding 200 kilometres (124 miles) an hour.

Weather authorities in China issued a "red" alert warning for Rammasun on Saturday -- the most severe of China's four colour-code warnings.

But the storm has since been downgraded "as it is abating and affecting fewer Chinese localities", Xinhua added.

All the airports on Hainan had re-opened on Sunday, as ferry, rail and bus services resumed, it said.

Meanwhile, China's National Meteorological Centre was warning that downpours triggered by the typhoon were expected in northern parts of China in the coming days.

Rammasun -- meaning "Thunder God" in Thai --  has caused at least 94 deaths in the Philippines, where it hit before lashing China.