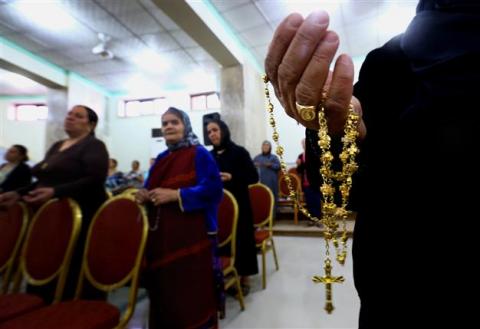 In this Saturday, July 19, 2014 photo, displaced Christians who fled the violence in Mosul, pray at Mar Aframa church in the town of Qaraqoush on the outskirts of Mosul, Iraq. AP Photo

The Islamic State on Sunday claimed responsibility for deadly Baghdad bombings, as the Christians they drove out of Mosul grieved for their lost homes and uncertain future in Iraq.

The flight of the centuries-old Christian community from Iraq's jihadist-held second city drew messages of solidarity and pledges of aid, both from former Sunni neighbours and Shiite leaders.

In a statement posted on jihadist websites, the Islamic State (IS) praised two of its fighters -- a German and a Syrian -- for two of a spate of blasts that killed 24 people in Baghdad on Saturday.

"Two knights of the knights of Islam and heroes of the caliphate were launched, Abu Qaqa al-Almani and Abu Abdulrahman al-Shami, to destroy checkpoints" manned by soldiers, police and allied Shiite militiamen, it said.

The near-simultaneous blasts were among the deadliest attacks in Baghdad since IS conquered large swathes of territory last month, exacerbating sectarian tension and pushing Iraq to the brink of breakup.

The Christian's eviction from Mosul was just the latest mass displacement in years of violence that have redrawn Iraq's ethno-sectarian map.

"We don't know what we're going to do or what will happen to us. Will we ever to return to our homes? Will the government rid the city of terrorists?" asked Umm Ziyad, 35.

She fled Mosul on Friday with her four children and now shares a house still under construction with several other displaced families in the Christian town of Qaraqosh, 32 kilometres (20 miles) east of Mosul.

According to clergy leaders, several thousand Christians fled Mosul on Friday and Saturday following an ultimatum by...