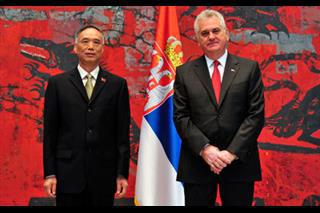 BELGRADE - Serbian President Tomislav Nikolic Tuesday received the letters of credence from the new Ambassador of China in Belgrade, Li Manchang, who said that the two countries were helping each other on issues of key interest, and conveyed Beijing's willingness to raise bilateral relations to a higher level.

Right now, Serbia is going through a very delicate period in its development as we are about to adopt important and complex decisions, and I am confident that we will have China's support and understanding, Nikolic said at the credentials ceremony at the Palace of Serbia.

The Serbian president said that bilateral relations between Serbia and China were characterized by traditional friendship and strategic partnership, and also mutual trust and sincere support for efforts to deal with the most important issues facing the countries.

Nikolic said that Serbia highly appreciated China's principled position not to recognize the unilaterally proclaimed independence of Kosovo, and it fully supported the One-China policy.

He pointed out that one of Serbia's key priorities was to ensure a favorable and secure environment for doing business and attracting foreign investment, especially from Chinese investors.

Ambassador Li said that the two countries were bound together by deep, traditional friendship that stood test of time and was only becoming stronger.

Our two countries support each other on issues of key importance and great interest to the other side and work to deepen mutual political trust, the Chinese Ambassador said in fluent Serbian.

Emphasizing that Serbia is a country of crucial importance in the region of Southeast Europe, Li said that thanks to the efforts of both sides...