Excellent relations between Serbia and China 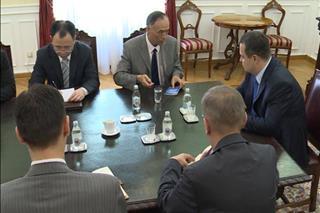 Dacic, who received the Chinese Ambassador after his taking office, underscored that Serbia and China have traditionally good relations, characterized by mutual trust and respect, and support for the most important issues in the interest of the two countries and peoples, reads a release issued by the Ministry of Foreign Affairs.

The relations have been improving continually, building on the foundations of the strong strategic partnership, so it is of key importance to continue strengthening the political dialogue and making top-level visits, the officials noted.

Serbia's deputy prime minister thanked for the considerable assistance that the Chinese government and people gave in order to help alleviate the adverse effects of the catastrophic floods that hit Serbia in May.

He pointed to the importance of joint infrastructure and energy projects that have a regional importance such as the building of the Obrenovac-Ljig highway and modernization of the Belgrade-Budapest railway.

Ambassador Li stressed that Beijing attaches a great importance to strengthening relations with Serbia in all fields, and added that, during his term of office, he will strive to fully contribute to improving bilateral relations even further, and through the mechanism for cooperation between China and 16 CEE countries.