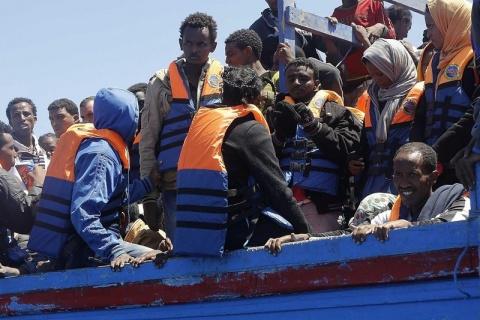 An image made available on 30 April 2014 shows migrants being rescued during operation `Mare Nostrum` in southern Mediterranean sea off the Italian coast, 29 April 2014. Photo by EPA/BGNES.

Nearly 80,000 migrants have taken dangerous boat journeys across the Mediterranean Sea to Europe in 2014, an increase of 60% compared to the entire 2013.

A total of 800 people have died this year alone trying to reach Europe, the UN Refugee Agency (UNHCR) reports. More than 260 people have died or have been reported missing as they attempted to cross the Mediterranean Sea towards Europe over the past ten days.

Italy received the greatest number of arrivals (63,884), followed by Greece (10,080), Spain (1,000) and Malta (227). A further 21,000 refugees and migrants have arrived in Italy since 1 July. The largest numbers came from Eritrea, Syria and Mali. Most left from North Africa, and principally Libya, a press release by UNHCR said.

UNHCR urged European countries to provide additional and better facilities to receive those rescued, and to identify longer-term solutions for refugees, including resettlement, admission based on humanitarian needs, admission schemes based on private sponsorship, facilitated access to family reunification and the use of programs such as student or employment visas.