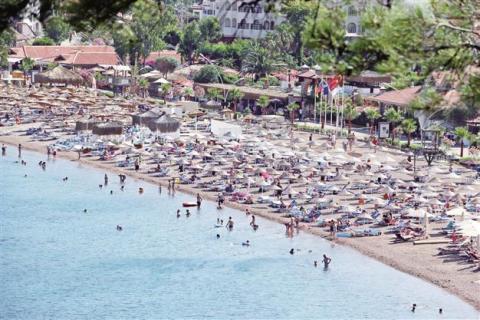 Turkey has been chosen third in the world in 2014 with its 397 blue-flagged beaches, according to the Chamber of Shippingâs (DTO) Ä°zmir Branch.

An official from the DTO in Ä°zmir said âit was a success for Turkey to be chosen thirdâ from a total of 70 countries, which saw Spain topping the list with 573 beaches and Greece in second with 407.

The blue flag is a certification awarded by the Foundation for Environmental Education (FEE) to countries that have beaches and marinas that meet its safety and environmental standards.

Due to the positive reputation associated with the blue flags, locals and international tourists tend to be attracted to blue flag beaches.

These flags are renewed every year and during their annual checks the sea water is tested every two weeks, lifeguards and security measures are monitored by the authorities. Environmental protection factors also contribute to the granting of the blue flags.