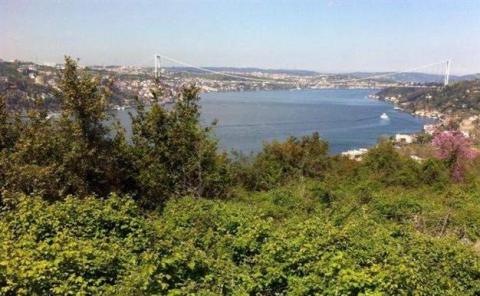 The property was reportedly purchased by King Abdullah in 1984. DHA Photo

Istanbulâs Sevda Tepesi (Love Hill), which has belonged to the king of Saudi Arabia since 1984, has returned to the agenda after the main opposition said a construction permit for the hill was granted only after Saudi Arabia sent $100 million to a charity that counts the prime ministerâs son as one of the board members.

Republican Peopleâs Party (CHP) deputy Sezgin TanrÄ±kulu submitted a parliamentary question yesterday asking if the Service for Youth and Education Foundation of Turkey (TÃRGEV), a charity NGO that includes Bilal ErdoÄan, son of Prime Minister Recep Tayyip ErdoÄan, among its board members, had received $99,999,900 donation in its account at VakÄ±fbank on April 26, 2012, in return for a construction permit for Saudi King Abdullahâs plot of land on the shores of the Bosphorus.

The permit was given only two months after the money transaction sent by chief of the Royal Protocol, which conducts protocol and agreements for the king, the CHP deputy added.

TanrÄ±kulu also asked if the king had formally applied for the permission to conduct construction and, if so, its date, as well as why the permit was not given.

The property was reportedly purchased by King Abdullah in 1984.