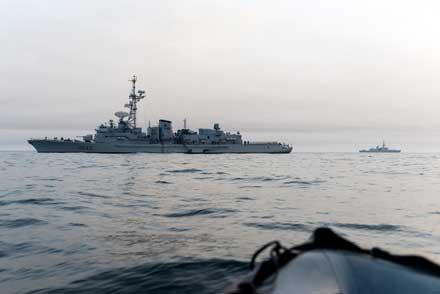 A handout picture taken and released on Wednesday by ECPAD French shows French Navy frigates FSM Montcalm and FLF Courbet at sea off the coast of Tripoli aboard which French and British citizens were evacuated from Libya due to growing lawlessness and unrest.

With the violence in Libya escalating to its worst level since the 2011 ouster of dictator Moammar Gadhafi, governments from around the world are scrambling to evacuate their citizens from the country, many seeking help from nearby Greece.

A Greek government official told AP Thursday that a merchant vessel has been chartered by the Chinese government for the evacuation of "hundreds" of its citizens, but gave no further details. The official asked not to be named because details of the operation are still being finalized.

According to the Greek Defense Ministry and other government officials, the Mediterranean country is also sending a navy frigate, Salamis, which was approaching Tripoli late Thursday, to pick up its embassy staff members as well as about 70 Greeks and dozens of others from China, Cyprus, Britain and Malta after their governments requested help.

The evacuations have been triggered by clashes between heavily armed rival militias in Libya resulting in the worst violence since the civil war three years ago. After weeks of fighting nearly 100 people have been killed, 400 others wounded, and much of the airport in Tripoli has been destroyed.

Many countries have suspended operations at their embassies in Tripoli, including Greece and the United States, and advised their citizens to leave the country.

"We are getting new requests for assistance all the time," the official said.

The European Union said it was moving members of its border assistance mission and other staff in Libya to Tunisia. And earlier this week, Spain sent a military plane to pick up 60 people from Libya, while France sent two navy ships to collect 47 people, mostly French citizens.